An aiming sport for blind people? Vanhollebeke’s curiosity in archery

This article was published to mark World Sight Day.

Ruben Vanhollebeke is the reigning world para and European para champion in the visually impaired 1 category. The 45-year-old has almost no sight – having been born with retinitis pigmentosa, a degenerative disease that breaks down the iris.

He’s established himself as a world leader in this emerging discipline of the sport.

“I quit work because blindness did not let me continue,” Ruben explains. “I went to a school for adult people who were blind and, there, I read in braille about archery on a daily basis.”

“I had not shot archery before I got blind.”

Like most, the concept of someone with limited vision participating in this particular sport seemed odd to Ruben.

“I thought, ‘an aiming sport for blind people? No way!’ But a teacher told me he was giving lessons and asked me if I wanted to try,” he says. “I immediately replied that I wanted. I was a little bit curious about how it worked.”

One year later, Ruben was competing in the Belgian championships.

“By practising, I started to feel the bow and everything around. It was real fun. And then, each time, you set your goal a little bit higher. If you shoot 81, you want 82,” says Ruben.

It was after the World Archery Para Championships in ’s-Hertogenbosch in 2019 that Vanhollebeke’s life changed… “let’s say, 50% around”.

“I started doing more archery. I practised more and learnt more about the bow,” he continues. “And even my English got better.”

Archers who compete in the visually impaired 1 category wear a blindfold in competition. A category for those who are completely or almost completely blind, the blindfold ensures a completely level playing field.

Ruben uses a tactile sight – a device that rests gently against the back of his hand – to aim. A spotter calls out where his arrows land.

Although he wasn’t an archer before he lost his sight, Ruben knows how a target looks.

“I really try to imagine it. If I talk about the target, I can see it in front of my eyes,” he says. “It’s a positive thing that I had seen everything and I knew what everything looks like. If they say red, I see red. If they say yellow, I see yellow.”

Ruben’s positivity in the face of his condition is inspiring.

“I had a grandad who always said, ‘there are people in a worse situation than you, think positive and look on the bright side’,” he says.

“I got a lot of friends and they’re still with me. When I lost my sight, they went through the whole process. They stuck with me and keep on supporting me. And now, I have a beautiful, wonderful wife that I found even though I have not seen her. But she feels really good!”

Vanhollebeke works in a kitchen, he practises archery – a lot – and he works towards growing the community of visually impaired athletes.

“Start doing archery and everything is going to be great,” he says is his advice to other blind people. “It is an amazing sport.” 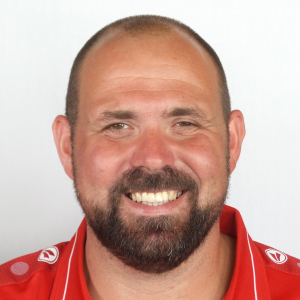