Karma, the affable archer from Bhutan, saw her Olympic journey come to an end on Wednesday, but only after completing a landmark achievement for her country.

Instead of competing at the Games via universality invitation, as Bhutan has at every Games since Los Angeles in 1984, Karma earned her ticket outright, becoming the first athlete from her country, in any sport, to win a quota place to the Olympics.

She scored a competition-best 616 points during qualifying in Japan, seeding 56th overall, and faced world number one Deepika Kumari of India in her first round match. Pulling out the upset would have been a tough ask.

And while she lost in straight sets to the heavily favoured Kumari, Karma was nonetheless pleased with the significant progress she has made for Bhutan by attending these Games.

“To qualify for the Olympics was my biggest dream. To achieve the Tokyo Olympics was like achieving a medal for our country. I’m very satisfied,” said Karma.

“I didn’t think I'm scared or I want to beat her, she could beat me. I didn’t think of that. I just kept in mind that I wanted to give my best. I don’t care if I lose or win. I’m satisfied.”

Karma won her quota spot for Tokyo during the Asian continental qualification tournament in Bangkok. By earning her place, rather than receiving a wildcard invitation, she said she felt less pressure to perform well when she arrived at the Olympics.

She had earned her place among the world’s best outright.

Training under the watchful eye of coach Young Sook Park, the 1984 Olympian also known as Sally, she has made leaps of technical progress and it’s starting to show on the competition field.

“She is god’s gift to me,” Karma said. “Whatever I achieve, it’s all because of her. She helped me a lot. I thank her. Because of her, I’m here."

It appears that the feeling is mutual. Coach Sally was quick to praise Karma, even after her loss to Kumari, commending her star pupil for her progress.

“She was fantastic,” Sally said. “I never felt that type of pressure. Everything was perfect. I’m very satisfied with her performance.”

Archery is Bhutan’s national sport – but it’s traditional archery, which consists of teams shooting at wooden boards over a distance of 150 metres that’s popular. Elite international archery used to be constrained to a six-athlete team of three men and three women. Sally is building something bigger.

The archery competitions at the Tokyo 2020 Olympic Games continue with individual eliminations until the end of the day on Thursday. 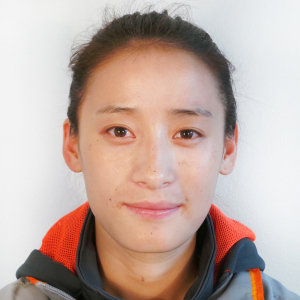