That was the simple statement posted on social media by 17-year-old Swiss archer Liliana Licari after she swooped in to take the under 21 recurve women’s title at the Sud de France – Nimes Archery Tournament in January.

Describing herself online as an ‘aspiring Olympic medallist,’ Licari trains six days a week at the World Archery Excellence Centre in Lausanne, Switzerland, but there was no preparation possible to get her ready for entering the competition field in Nimes – a dark, cavernous experience punctuated by flashes of light and a volcanic eruption of noise and music.

“It was my first time in this kind of arena and was nothing like I’d ever experienced in my life,” said Licari. “The atmosphere was really intense.”

After qualifying as the second seed with a 569-point 60-arrow round, she dispatched France’s Maia Tincu 6-4 in her matchplay opener, then overcame Habjan Teja from Slovenia, 6-2, before defeating a second host nation archer, Audrey Machinet, 6-2, in the semifinal.

But she saved her best for last.

Her straight-set victory over the number one seed from the Netherlands, Quinty Roeffen, in the finals arena saw Licari drop just a single point and finish with a perfect 30.

It was fitting revenge, Licari having lost to the Dutch archer in a shoot-off in the last-16 at the World Archery Youth Championships in Poland last August.

“I started off quite well during qualifications and ranked second with a score of 569 before the elimination rounds began,” said Licari on her social media channels after the Nimes event.

“I made a few mistakes, but I learned from them and used them as lessons of what not to do during the matches. I found a new rhythm to focus and calm down between arrows and ends, trying my best not to get distracted by the lights and super loud music.”

“The elimination rounds were so thrilling, I loved every moment of them,” she added. “I started wearing my sunglasses indoors, to be able to stay focused and I did my best to create a hallway between the target, myself, and my coach. I needed blinds like a horse.”

Licari has galloped to success after only taking up the sport in 2018.

She puts that fast rise down to the professional approach, expertise and facilities available at the World Archery Excellence Centre, the high-performance and development venue in the Olympic Capital of Lausanne.

“The night before the final, my personal coach Kyeong-Su Jeoung [also the head coach at the Centre] and I worked hard,” said the 17-year-old. “We simulated the timing of the match and visualised all of the lights, sounds, and colours. He advised me not to look at the screen above the targets.”

“He said: ‘create a hallway, focus on the target, the ground and me – don’t worry about anything else, do your best with what is in your control’,” she revealed.

“We watched many videos of previous matches on YouTube to understand anything that would be different from what I was used to. We prepared our best so that we wouldn’t look back and imagine all of what we should, would or could have done.”

The power of that good coaching was felt in full.

Nimes is Licari’s first major event medal, first win – and were it not for Felix Wieser’s almost-ridiculous perfect five-set match in the senior finals later in the day, she might have been the most impressive archer in the famous French arena.

“I never knew what I was capable of until I actually got the result,” admitted Licari about the final. “This taught me how I need to align my mind and body with a very strong focus and when I do that, the best outcomes can be achieved.”

And her coach’s response to her fulfilling her potential under the competition spotlight?

“We didn’t talk initially because we were in awe of what just happened,” she said. “I said something like, ‘is it really over, did that just happen? I’m hungry.”

Over the week that’s since passed, the gravity of the achievement has had time to sink in.

“My dad and I wrote to all the people that have helped along the way,” said Liliana. “It takes a team to achieve something special like this.”

That team will now focus on a trip to the US for the Vegas Shoot, the next and last major event on the Indoor Archery World Series calendar, where Licari has a first opportunity to build on this newfound proof of her potential.

“To be honest, it’s taken a while for the actual result to sink in,” she said. “I took the Monday off [after Nimes] and was back to training and doing school work on Tuesday. I almost forgot about the crazy weekend.”

“People around me congratulated me throughout the week, and the realisation that I had actually won started to sink in.”

Celebrations over, sights are now set on the future for this promising young athlete in a country that’s long been searching for a marquee recurver to collect medals on the world stage.

“I’m aware that this is only the beginning, but getting this win is a push forward to motivate me for the future. I will do my very best to keep this mentality and focus in Vegas next weekend and work on what I have learned from my experience in Nimes.” 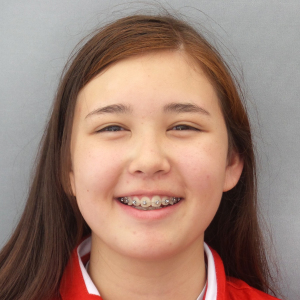