This week, it’s… para archer Shaun Anderson who shot at his first Games in Rio. Twelve years ago, the now 43-year-old South African came off his superbike, badly injuring his left arm. Seven years later, he found another passion.

“I’m a wild child. I think I’m the wildest child here. I live on the edge and I’m an adrenaline junkie,” Shaun said in September for an article ahead of Rio.

His first world championships appearance came in Bangkok in 2013, where he finished 33rd. Two years later, in 2015 in Germany, he shot in the worlds again – but his left arm was no longer in a sling, it had been amputated.

During the ranking round in Rio, Anderson had an equipment malfunction on the custom release that he designed with a friend back home in South Africa, which sits on a brace on his left shoulder and is triggered by a clothes peg sitting in his mouth.

He was able to fix it within the allotted time, and slowly climbed up the rankings, from last to 28th!

1. What was your favourite toy as a kid?

A waterbed that we filled up with air instead of water. My younger brother and my friends would lie or sit on it while I would be on our houses roof and jump on it, shooting into the swimming pool and all over the garden.

In the process we did break a few bones. It was crazy fun.

2. If you could choose one superpower, what would it be?

3. What is your biggest strength in archery?

My biggest strength in archery is not giving up and a fighting spirit. When the cards are down, coming back… and my new brace.

4. Who is your sport model?

It sounds weird, but through sport he brought our country together and that allowed us to compete internationally again.

5. If you were to design your own bow, what would you call it?

6. How much weight on your stabilisers?

7. What did you enjoy most in Rio?

The friends you make on the journey, the people, your teammates, the organisers, all the amount of people you get to meet during events, making bonds with all these people… Yeah, that’s what I enjoy the most!

I want to win a medal at the Paralympics. My first goal was to get here and learn a lot, and I made it. I’m now looking forward to Tokyo...

9. Will you use fat or thin arrows for indoors? 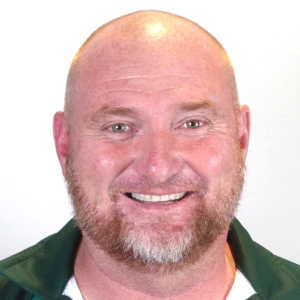