Archery at the Olympics

Archery has been a permanent fixture at the Olympic Games since 1972.

Archery’s history at the Olympic Games is split into two periods: the early era and the modern era.

The sport featured on the programme of the Olympic Games in 1900, 1904, 1908 and 1920 during the early era. It was also one of the first sports to feature women’s events, in 1904. The competition formats were inconsistent, often based on local rules, and archery was subsequently dropped from the programme. World Archery was founded in 1931 with the goal of rejoining the Games.

Archery returned to the Olympic Games in 1972 and has remained on the programme ever since. During this modern era, the competition format has evolved toward exciting, easily accessible and broadcast-friendly head-to-head matchplay. Two gold medals, for the individual events, were awarded from 1972 to 1984; team events were added in 1988. The mixed team event was added for 2020, bringing the total number of Olympic Champion titles available in the archery competitions to five.

Since 2004, the archery competitions at the Olympic Games have often been held in iconic locations like the Panathinaikos Stadium (2004), Lord’s Cricket Ground (2012) and the Sambodromo (2016).

Hubert van Innis of Belgium is archery’s winningest Olympian, including the early era, having collected six gold and three silver medals at the Olympic Games in 1900 and 1920. Kim Soo-Nyung of Korea is archery’s winningest Olympian in the modern era, having collected four gold medals, one silver and one bronze at the Olympic Games in 1988, 1992 and 2000.

Darrell Pace of the USA is the only archer to have won the individual event twice. He took gold medals at the Montreal 1976 and Los Angeles 1984 Olympic Games.

Korea is archery’s most successful nation at the Olympic Games. The country made its debut in the Olympic archery competition at Los Angeles 1984 and has since accrued 23 gold, nine silver and seven bronze for a total of 39 medals. The Korean recurve women have never lost the team event in the eight times it has been held since 1988.

Korea won all four gold medals for the first time at the Rio 2016 Olympic Games.

Archer Neroli Fairhall of New Zealand became the first paraplegic athlete to compete in any sport at the Olympic Games in 1984.

Archers at the Olympic Games use recurve bows and compete in the discipline of target archery.

Nations must qualify quota places. A maximum of 128 athletes can compete, 64 men and 64 women. Places are won at world qualifying events and continental qualifying events. A small number of places are assigned using the universality system, which ensures archery’s developing countries can participate and the competition field remains diverse. Each country can send a maximum of three men and three women to the Olympic Games.

Archers and teams shoot in head-to-head brackets, in which the winner of each match advances and the loser is eliminated until a champion is crowned.

The 10-ring on the target measures just 12.2 centimetres in diameter, which is about the same as an apple.

The qualification phase consists of each archer shooting 72 arrows. Archers are ranked by their total score for the individual event. These rankings provide the seeds for the brackets.

The matchplay phase consists of archers, mixed teams and teams progressing through head-to-head brackets, one for each category, in which the winner advances and the loser is eliminated until a champion is crowned. Matches are decided using the set system.

In an individual match, each archer shoots one arrow. The archer whose arrow lands closest to the centre of the target wins the match.

(If the judge cannot decide whose arrow is closest, they may call for another shoot-off.)

(If the judge cannot differentiate between the mixed teams or teams after the last arrow, they may call for another shoot-off.)

Delayed by one year due to the COVID-19 pandemic, the Tokyo 2020 Olympic Games will debut the mixed team event, bringing the total number of gold medals available in the archery competitions to five for the first time in the modern era. 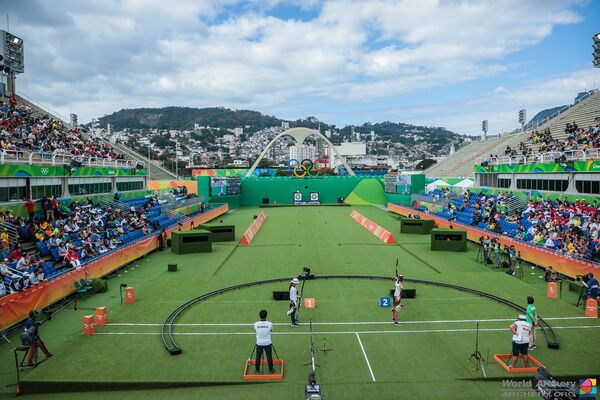 Held in the famous Sambodromo Marques de Sapucai, the archery competitions in Brazil saw Korea win all four medals for the first time in history. It was the first Games to use the set system for the team event. 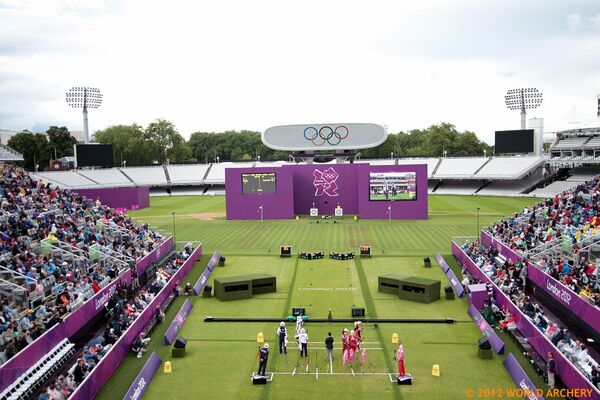 The set system was introduced for the individual events at London 2012, when the archery competitions were held at Lord’s Cricket Ground. More than 60,400 spectator tickets were sold, and the success of the event led archery to be named as a core sport at the Olympics. Oh Jin Hyek became the first recurve men’s champion from Korea. 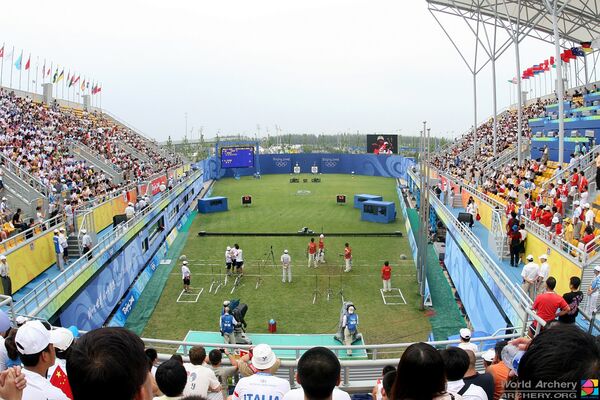 There were two match arenas, running side by side, for the archery competitions at Beijing 2008. Zhang Juan Juan, representing the host nation of China, won the recurve women’s event and generated a lot of national attention. 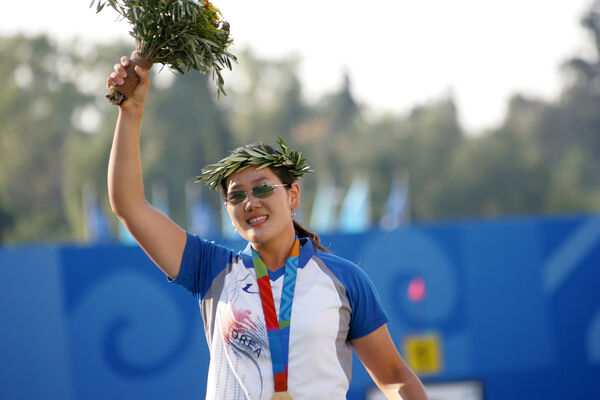 The archery competitions at Athens 2004 were held in the Panathinaikos Stadium, which was the venue for the first modern Olympic Games in 1896 and the Ancient Greek’s Panathenaic Games.

Australia’s Simon Fairweather won the recurve men’s event in a purpose-built venue in Sydney. Eight Olympic records and three world records were broken during the competition.

The 128-athlete quota was introduced at Atlanta 1996, alongside a qualification system, making archery one of the first Olympic sports to feature an equal gender split at the Games. More than 54,000 spectators watched the events, and archery won the International Olympic Committee’s Golden Rings Award for the best broadcast coverage. 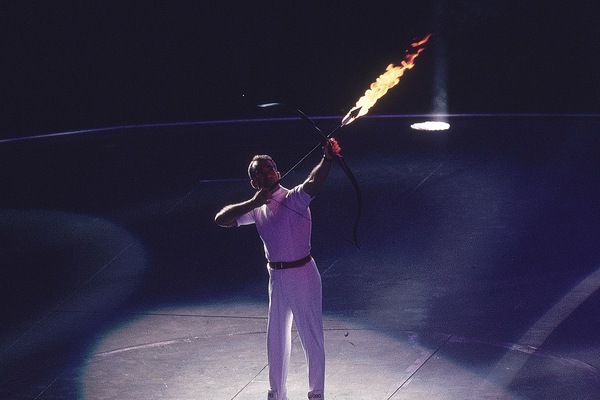 A pivotal event in archery’s Olympic history, Barcelona 1992 introduced the head-to-head match format to the Games. The accessibility of the new style of competition for spectators and broadcasts laid the foundation for archery’s later success. During the opening ceremony, para archer Antonio Rebollo lit the Olympic cauldron with a flaming arrow. 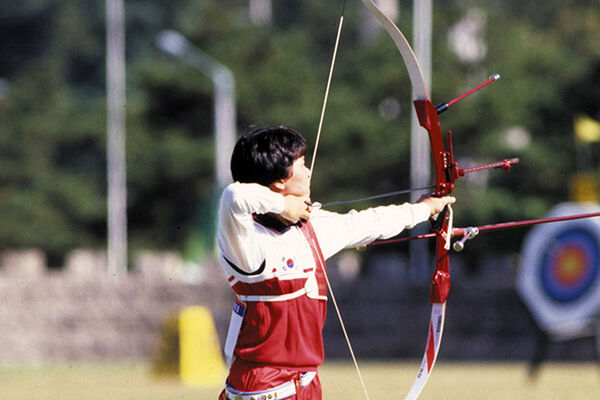 The team events were introduced for the first time at Seoul 1988, bringing the total number of gold medals available in the archery competitions to four. In an attempt to improve the spectator experience, an individual competition format called the Grand FITA, which saw athletes eliminated as the event progressed, was used for the first and only time at the Olympics. 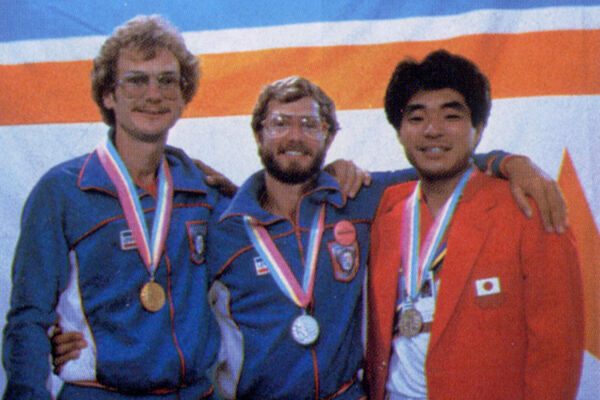 Darrell Pace of the USA became the first – and only, to date – person to win a second individual Olympic title at Los Angeles 1984. Neroli Fairhall of New Zealand, who finished 35th in the women’s event, became the first paraplegic athlete to compete in any sport at the Olympic Games.

The USA boycotted the Moscow 1980 Olympic Games, and archery crowned its first champions representing countries other than the United States for the first time since the sport’s reintroduction to the Olympic programme in 1972.

The USA swept both Olympic titles for the second consecutive event following archery’s reintroduction to the programme of the Games.

Archery rejoined the programme of the Olympic Games after a 52-year hiatus, using official international target archery rules for the first time. John Williams and Doreen Wilber became archery’s first Olympic Champions in the modern era. The winners were decided by the total cumulative points score on double FITA rounds.

The sport was removed from the programme of the Olympic Games following the event in Antwerp, largely due to the lack of international rules and structure. World Archery was founded in 1931 to regulate the sport with the goal of returning to Games. 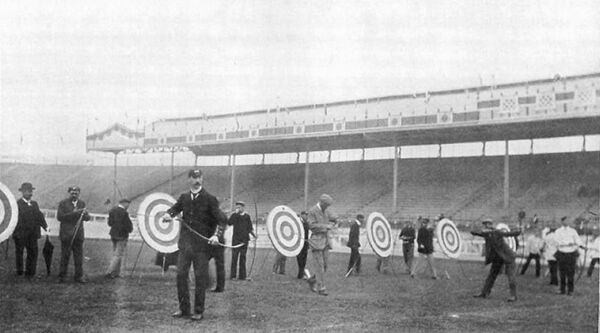 Archers from France and the USA joined the hosts Great Britain to compete in various events using local rules. Queenie Newall won the women’s double national round event at the age of 53. To this day, she remains the oldest gold medallist in Olympic history. Lottie Dod, a sporting all-rounder and tennis star who won Wimbledon five times between 1887 and 1893, finished second.

Twenty-nine archers from one nation participated.

The 1900 Olympic Games were held alongside the world's fair in Paris, France. Many archery events were held and more than 5000 archers participated; however, only seven of the events, featuring archers from France, Belgium and the Netherlands, are generally considered to be part of the Olympics. Many of the other events acted as qualifiers. Local rules for early formats of target archery and popinjay archery were used.

A world championship competition was held for the two archers who achieved the best results across the target archery events. Henri Herouin beat Hubert van Innis, 22 to 16, but little is known about the format of the competition.